Well-known for it's health benefits, cinnamon is used for everything from lowering blood sugar and cholesterol to relieving pain from arthritis. It's more than just a great flavor in cuisine!
This post may contain affiliate links. Please read my full disclosure policy for details. 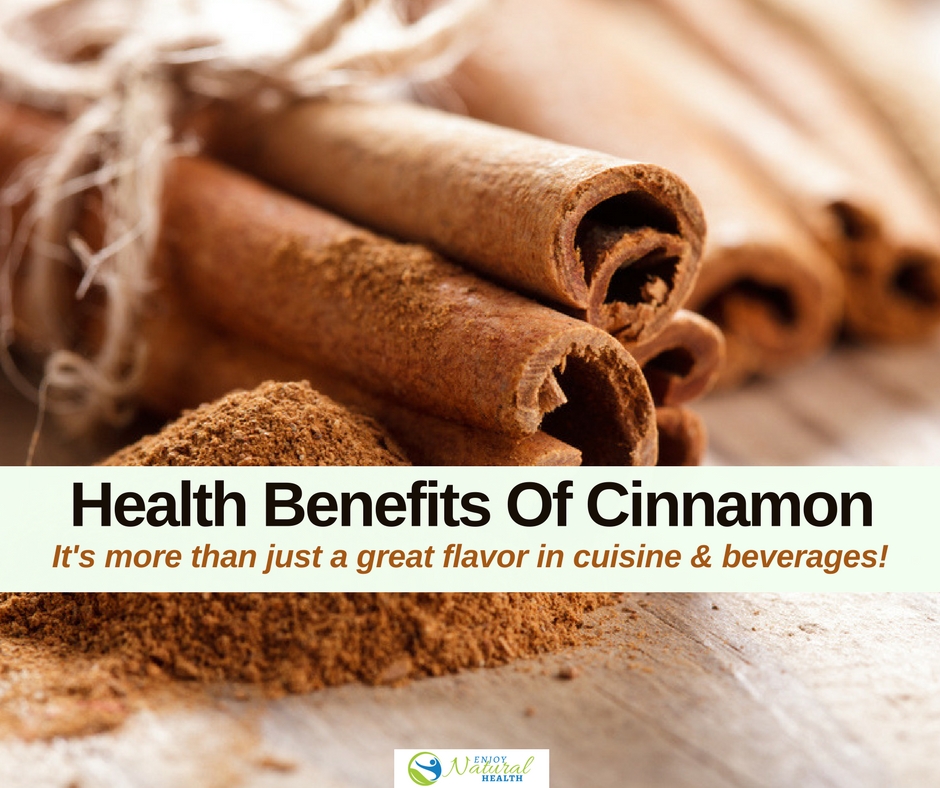 Who doesn’t love a touch of cinnamon on top of a chai latte or a fresh apple pie? It is one of those spices that just has a fabulous taste. But the taste is only the tip of the iceberg.

Cinnamon is a spice that is derived from the inner bark of a tree known as Cinnamomum. As far back as Ancient Egypt, it has served as a significant ingredient with a wide range of benefits. In fact, it was so rare and valuable that it was considered a gift only fit for kings.

Today, cinnamon is cheap and readily available in local supermarkets and is included in all sorts of recipes and foods.

The spice comes in two types:

To make cinnamon, the stems of the Cinnamomum tree are cut first, and then the inner bark is extracted. The woody parts are discarded.

Once it dries, it shapes into strips that coil into rolls, known as cinnamon sticks. You can grind these sticks to get cinnamon powder.

The oily part of the cinnamon, which is concentrated with a compound known as cinnamaldehyde, is responsible for the distinguishable smell and flavor of the spice, as well as most of its powerful health benefits. Without further ado, here are the top 16 health benefits of cinnamon.

Studies show that cinnamon can prevent and reverse the symptoms of type II diabetes, having a beneficial impact on insulin sensitivity and glucose levels. If you are diabetic, you can drink it as a tea, take it as a supplement, or include it in your meals more regularly.

Cinnamon has been known to reduce triglyceride concentrations, LDL cholesterol (the “bad” cholesterol), and overall cholesterol levels without interfering with the “good” HDL cholesterol. All of these add up to reduce your risk for diabetes, stroke, and heart disease.

The spice can help reestablish the necessary signals and keep sugar levels under control in order to slow the growth and progression of the cancer cells.

One of the most effective antimicrobial substances available to man is cinnamon essential oil. It works powerfully against several dangerous fungi, viruses, and bacteria.

Cinnamon tea can really help counter the flu and cold season, while cinnamon essential oils can be a great tool for sanitizing and disinfecting your home.

To prepare the solution, dilute your cinnamon oil in distilled water, and then shake and spray. Only 1 percent cinnamon oil is needed in this concentration.

Cinnamon is rich in antimicrobial properties, making it an effective weapon for treating athlete’s foot, ringworm, candida, and much more. Cinnamon tea is an excellent way to boost your natural resistance against candida.

Diluted essential oils/tea can be used externally, but applying on sensitive areas can lead to irritation and a burning sensation. To treat athlete’s foot, combine a few drops of cinnamon oil with coconut oil, and dilute.

Cinnamon has the ability to kill a wide range of bacteria, including E. coli, which makes it very powerful at combating food poisoning. Once you detect the symptoms, prepare a batch of tea as soon as possible.

Cinnamon is so much more than just a spice. It is rich in fiber, calcium, iron, and manganese. You can boost your body’s minerals by including it to any of your recipes.

When you add a few drops of cinnamon oil into your diffuser, the warm and spicy fragrance will neutralize the odor. In addition to masking the foul scents, the spice will kill any bacteria that may be responsible for the odor.

There are several essential oils that have been proven to have a stimulating effect on our alertness, focus, cognitive function, and memory. Some of the finest include rosemary, peppermint, and cinnamon.

You are probably aware that your memory and sense of smell are intimately linked together, but it appears you can use this to your advantage. Just a whiff of cinnamon can boost your alertness and even improve your mood.

One of the most distinguishable health benefits of cinnamon is that it is a potent antioxidant, topping most of the other spices in this class. This means it has the ability to fight against free radicals that can cause cancer, premature aging, and other damage.

Cinnamon regulates blood sugar levels, thins the blood, and improves circulation. This leads to few sugar cravings that in turn makes you eat less and gives you more control over your calorie intake.

Cinnamon is a popular ingredient in many types of mouthwash and chewing gums, and for a good reason. Cinnamon contains antibacterial properties that help protect your gums and teeth from damage, as well as improving your breath. Try sipping lightly sweetened cinnamon tea or oil pull with a blend of coconut oil and cinnamon oil. Spry and Crest are just examples of toothpaste brands that has cinnamon as ingredient.

Cinnamon’s ability to control pests does not stop at the microbe level – it can repel several insects as well.

Spray 1-percent diluted essential oils onto your skin, hair, and clothing to repel biting insects such as mosquitoes. Spread a layer of cinnamon on the front of your door to keep pests away.

Put a couple of cinnamon sticks inside your closet to prevent moths from taking over. Use a 5-percent concentration on windowsills, doorways, and in garage entrances.

Due to its powerful effect against pests and bacteria, cinnamon can work as a great food preservative. Add it to the recipes you are looking to preserve in the fridge for a little longer, or brush a little cinnamon dust onto your bread bag to keep mold away.

Cinnamon facilitates circulation, leading to a warming effect that can ease the symptoms of arthritis. While there are not many studies to back this up at the moment, anecdotal evidence suggests that this spice can go a long way towards reducing pain and inflammation.

16. Helps with infertility and PMS

Cinnamon is high in manganese, which reduces cramps and mood swings during PMS. It also contains an active compound known as cinnamaldehyde, which can help balance your hormones.

How much cinnamon should you take?

Since cinnamon is not a medical treatment, it does not have an established dosage. However, a good rule of thumb is between ½ and 1 teaspoon of powder per day (2 to 4 grams). Excessive doses can be toxic. 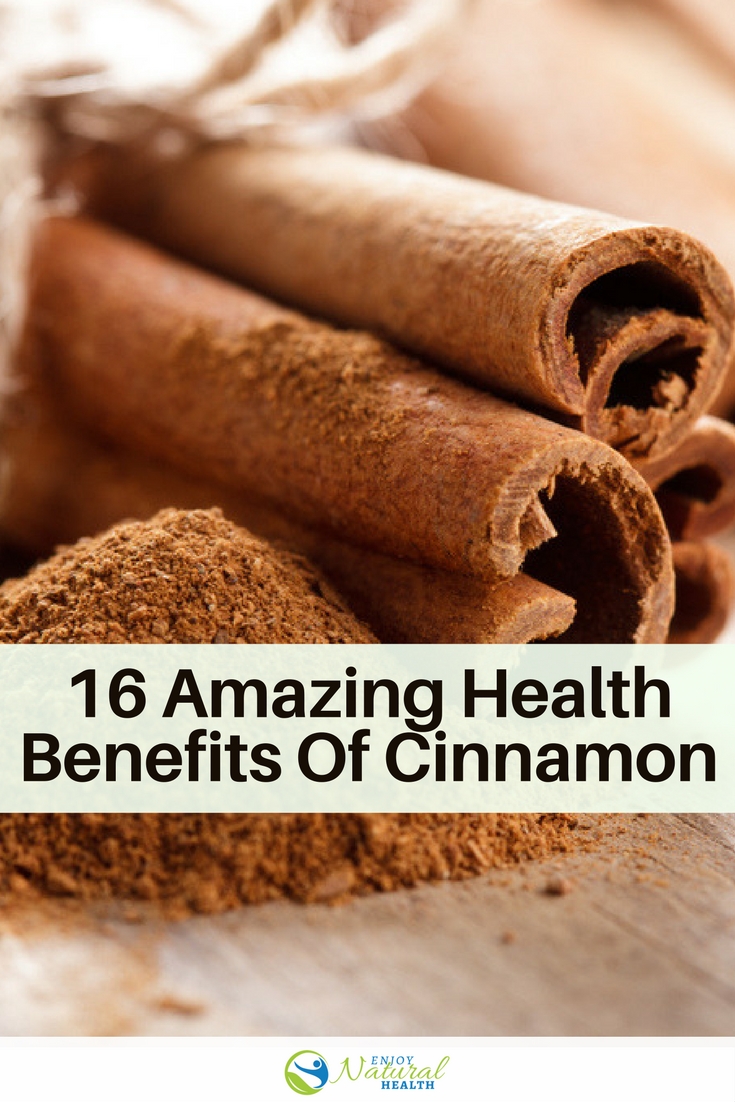