Cinnamon oil is a fantastic essential oil for fighting inflammation, increasing circulation and providing immune support. It can also be used to relieve depression and stimulate libido! Find out more!
This post may contain affiliate links. Please read my full disclosure policy for details. 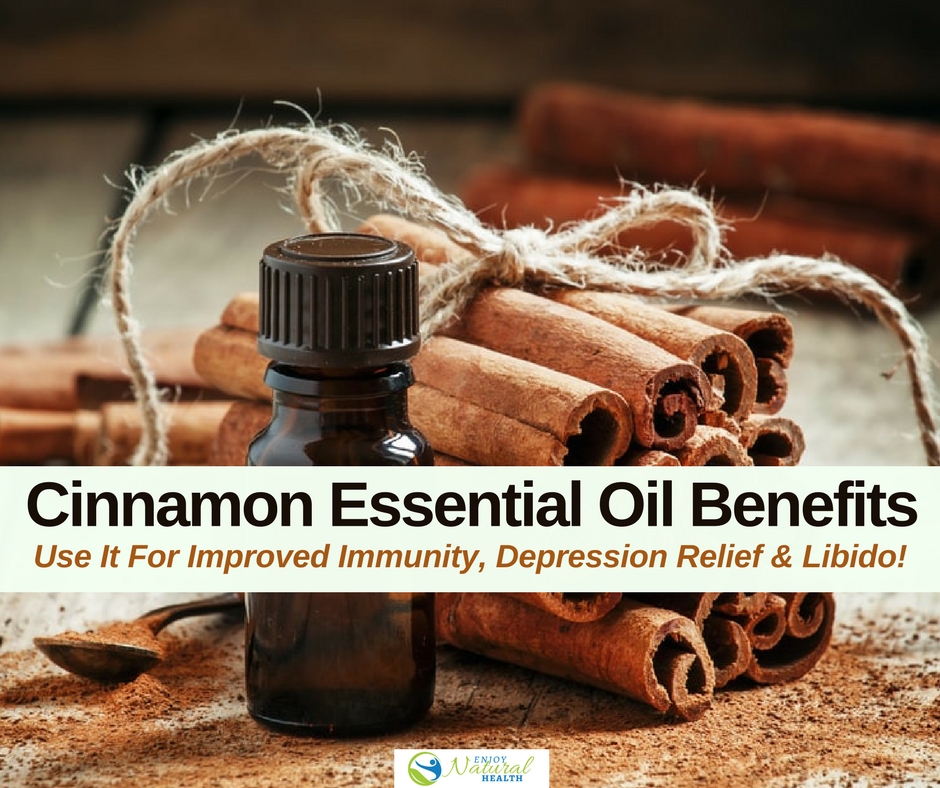 Many of us are familiar with cinnamon powder or cinnamon bark for flavoring our desserts.  However, cinnamon oil is also very useful.  The essential oil of cinnamon may come from either the bark or the leaf of the cinnamon tree, which is indigenous to Sri Lanka but has now been cultivated in other Asian countries as well.  Oil from the bark is more potent compared to oil from the leaf which is lighter and easier to use. let’s take a look at how we can use cinnamon essential oil for improved health!

When used to massage affected body parts, cinnamon oil can bring down swelling and alleviate pain.  The warmth it produces from the oil and from its scent is also relaxing and loosens tired muscles.  A word of caution, however; when using cinnamon oil for massage, dilute it with other essential oils because its spicy nature may trigger allergies in some people.

Its effectiveness in eradicating germs makes it a good addition to essential oils used for naturally cleaning and freshening the home.  It’s also great for deep cleaning your face and detoxifying your skin.  Combine a few drops of this oil with honey and a carrier oil such as coconut oil to make a facial wash.

In addition, because it’s antibacterial and antifungal, cinnamon oil can be used to rid your feet of fungal problems.  It greatly relieves fatigued feet as well as eliminates nasty odors especially if you constantly wear closed shoes.  Just immerse your feet in warm water mixed with a couple of drops of this oil.

4. Enhances the health of your hair

If you’re concocting your own shampoo or you’re using natural shampoo without parabens or chemical preservatives, try mixing in a few drops of cinnamon oil.  This will disinfect your hair of pollutants, increase your hair’s softness and shine and promote hair growth.

Bloating, cramps, indigestion, and other digestive problems can be remedied with a gentle massage using cinnamon oil combined with other essential oils.  When added to food, cinnamon also aids in facilitating good digestion, expelling gas and easing nausea and vomiting.

The disinfecting properties of cinnamon oil also make it a good alternative to your regular mouthwash.  It exterminates bacteria in the mouth that cause odors, giving you clean and fresh breath.  Dilute a few drops of cinnamon oil in water and gargle for several seconds.

Because cinnamon oil has a strong smell, it’s able to keep away annoying insects such as mosquitoes, flies, and ants.  Spray it around your home, especially on common entry points for insects or place several drops on a cotton ball and wipe it on surfaces.

Cinnamon is excellent for regulating insulin to keep your blood sugar in balance and keep you from eating too many sweets.  Cinnamon can, in fact, be used as a replacement for sugar to flavor some of your desserts or drinks like coffee.

Also read: 25 Medicinal Plants You Can Grow Yourself